Judge Not Lest Ye Be Judged...

Saturday morning was a disaster, until something happened which completely changed my perspective on the day, and on life.

I overslept, and had to raced out of the house at 7.30 into a dark and misty morning, aiming to get to London Victoria before 9 o’clock. My bus was late. The train was delayed. I missed my coach, had to book a later one and realised that my phone was almost dead. I was tired, frustrated and angry.

I finally found a little Starbucks where I could charge my phone, but the queue was massive, so I swagged a seat near a socket before I lost my chance. When the queue died down I went to order some breakfast – I somehow ended up paying eight quid for a coffee and a sandwich. It was a massive rip off but I didn’t check with the cashier because I was annoyed and worried that someone had sat down right next to where my phone was plugged in. A typical distrustful, angry Londoner.

I went over to the man and said excuse me, and immediately felt bad when he apologised and announced that he was blind. I sat down on the other side of him somewhat awkwardly, and he started to talk to me.

Some people don’t like talking to strangers. I don’t mind, although I am always cautious. One of the first things he said to me was “Don’t be afraid of me, I’m not going to attack you”. I was still agitated from the morning’s events, but I wasn’t scared of him, and I tried to reassure him.

He started to tell me about how much he loved ballet, how he had travelled to beautiful countries and read thousands of books. Then he repeated the fact that he was blind. Confused, I went along with what he was saying. He asked me if I did any sport, and when I told him I used to trampoline he lit up, telling me how he used to do it too because it helped with his stunt training. I asked him if he was a stunt man, and he said yes and that he’d been in many films, and been nominated for an award.
When I asked him, rather cynically, if I would have seen him in anything, he reeled off a list of films and told me how nice Pierce Brosnan was, and that he was friends with Daniel Craig. I'm ashamed to say I still wasn't sure if I believed his story.

Again he asked me why I was afraid of him, and I said that I wasn’t. I asked him why he kept thinking I was scared of him, and he answered “Because I’m disabled”. I told him I didn’t find blind people terrifying, and he giggled.

He asked me if I liked animals, and told me how much he had loved his horse. “My horse was Spanish. I spent five years in hospital in Spain. The doctors were lovely. I don’t remember it”. I asked him why he was in hospital. “Had a parachute accident. See look, I had a tracheotomy. I’ve got brain damage, I’ve got no memory.” I started to understand why he kept repeating himself, and why he said things were beautiful even though he had told me he was blind. “I’m mostly metal inside now” he said. “Does that make you like Wolverine then?” I asked him, and he laughed again. His laughter was wonderful and genuine, his face lit up and I felt like I was seeing the real him.

We talked about philosophy, psychology, sports, ballet, Africa, relationships, careers and life. He told me he was 43, as if he thought it was old. I told him that he wasn’t old, and that he had definitely lived those 43 years. “They should write a book about your life” I told him, “They said they wanted to make a film about me” he replied.

Ben Bellman fell out of an aeroplane and his parachute failed to open. He fell two miles to the ground and spent five years in hospital in Barcelona being put back together.

Before his accident, he was proficient in ten sports, and taught those sports to others. He was a journalist for Time Out. He lived in India and was a successful DJ in New York. Ben was a stunt man, performing in Band of Brothers, The Musketeer, The Mummy Returns, Gladiator and others, and was nominated for the Taurus Award for Best Fight in Die Another Day. He did over a thousand skydives before the accident which damaged his brain, made him blind and put him in a wheelchair.

Today, Ben can walk and his memory and sight are improving. He loves those close to him, continues to exercise daily and most of all, he lives. Ben is not angry about what happened to him. When he left Starbucks I looked him up, and I found this blog.
Every day he goes out and lives his life and talks to people he meets about what he has done, and it seems that those who give him the time of day are truly moved. He is the sweetest, strongest person I have ever met; the half an hour I spent with him brightened up my day and gave me a fresh perspective on life. It seems that in spite of his accident, Ben is still bringing joy to the lives of complete strangers just by being himself. It breaks my heart that, with all the brain damage and memory loss he has suffered, one of the main things that seems to surface in his mind is that people might be afraid of him simply because he is disabled.

Don’t judge people based on your first impressions, and don’t be fearful of that which is strange or new. Most of all, don’t waste your time being angry; use it to live. The world is full of beautiful moments and wonderful stories, and I would like to say thank you to Ben Bellman for reminding me of that. 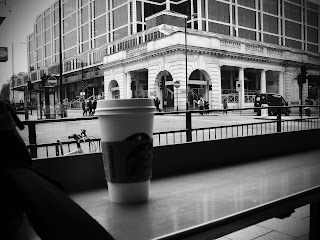 Everything here comes from what Ben Bellman told me himself. The more specific details were found on the following sites, where you can also find extra information about this incredible man.
http://rodcorp.typepad.com/rodcorp/2008/05/im-not-angry.html
http://www.guardian.co.uk/lifeandstyle/2007/apr/21/healthandwellbeing.features2
http://www.imdb.com/name/nm0069104/filmotype
Posted by Sarah at 18:41 9 comments: